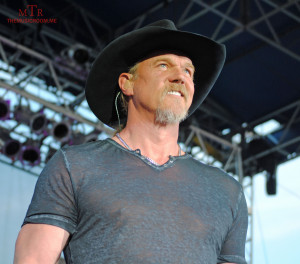 Trace Adkins played the Horseshoe Casino Cincinnati this past Thursday night. This was Adkins first visit to Cincinnati since his very publicized melt down on a cruise ship earlier this year. Since that time the country crooner has gone through a divorce and rehab for alcohol related issues. One couldn’t help but to be curious as to what state Trace would be in. All questions were answered from the moment his towering presence hit the stage. As he walked out of the stage doors, Adkins looked healthy and refreshed. With a see through shirt that showed off his well maintained physique and smile on his face, it was clear that Trace is doing just fine. If there was any doubt left, the singer let his baritone pipes speak for themselves as he delivered a set that included hit after hit from his long career. Adkins even showed that he still has his sense of humor. After playing the song, “Hillbilly Bone,” a Blake Shelton song in which Trace appeared on , Adkins said he played that one from Blake who is probably drunk somewhere right now. During the set, Adkins played a couple of new songs that will appear on a new record in the future. The singer seemed very excited about his new material. It is unclear what label that Adkins is with right now as his profile no longer appears on Toby Keith’s Show Dog roster, but it looks like that it will be an album to look out for!

Check out our photo gallery from the show! 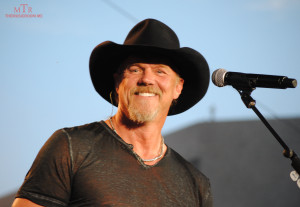