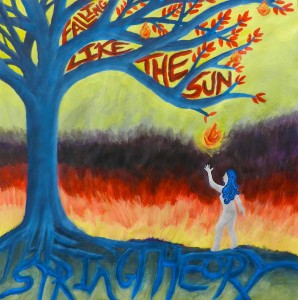 The Independence Kentucky trio, The String Theory, has released its debut album “Falling Like The Sun” and the guys have come out of the gate swinging. Released on the independent label, Dragonfly Digital Solutions, the album is a hard rocker at its core, but also shows levels of depth and maturity in the nine songs that make up the record. With David Cahill on guitars and lead vocals, Tristan Arnold on Drums, and Andrew Sterner on bass and backing vocals, the group is a dynamic power house that commands the listeners attention from the opening riff of the first track, “Falling Like the Sun.”

While it is unclear if the band derived its name out of a love of physics, it is clear they understand the science of building a song. Each song on the record has been carefully crafted, and contains the perfect mix of sophisticated parts. At certain points during the record, the instrumentation is reminiscent of a band from Canada by the name of Rush.  An example of this comparison comes on the track “A Delay.” At the heart of the band’s sound are some amazing riffs from Cahill. The riff, sadly, seems to have lost its importance by many bands today, not with The String Theory. Some memorable riffs of this record come on the songs “Desire (Tricky Little Flame)”, “Out of Nowhere” and my favorite track on the record, “Pride.” Andrew Sterner and Tristan Arnold provide a solid rhythm section and each have their moments of the record where their talents can be showcased. Sterner sets the pace on “A Delay” with a funky bass groove and Arnold shines on track “Out of Nowhere.”

I believe what makes this band special is their knowledge of when to hold back and build the song and when to let loose and just go for it. At no time during the record does the band’s sound become redundant. Too many hard rock bands make the mistake of starting at 10 on the first song of the record, and by the time you get to the end, you can’t pick out special moments on the record. While the band comes out strong on the opening track, the album contains plenty of peaks and valleys that keep the listeners interest for the duration of the record. The band saves their most dramatic twist for the last song of the album.”The Drunken Dutchman” is an acoustic number that provides a soft, yet memorable conclusion to a powerhouse of a record.

The String Theory is a hard working and talented band that deserves your attention. Pick up their record, “Falling Like The Sun” here. And be sure to catch them live when you have the chance.