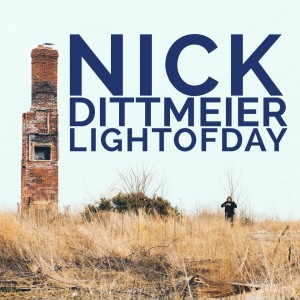 I have never met Nick Dittmeier, but he sure seems like a likable kind of guy. How do I know? I don’t. Its just the feeling I get after I finished listening to his new album, “Light of Day.” The record, released this past April, is a collection of songs about life delivered with a free and easy approach. There are some songwriters out there who work so hard to be seen as “deep” that the listener ends up never getting the message of the song. Nick Dittmeier takes a different approach to his writing.  Dittmeier is an observer of life and manages to perfectly capture his observation in catchy, well crafted songs. A perfect example of this, comes on the song “My Grey Suit.” Dittmeier attaches key life moments to something as simple as grey suit, and it works. Moments where we have to put on our best, clothes and face. From his father’s funeral, to walking his niece down the aisle because his brother is in prison, that grey suit is there through it all. In “Songs The House Makes,” the songwriter turns the everyday sounds of his house, like the dog barking and coffee pot brewing, to music. I found myself listening to the words of this acoustic ditty and saying, “Oh yeah.” It is the simple every day things of life that this artist uses as his muse to write some killer songs. It is no wonder that he was nominated for “Songwriter of the Year” at the Louisville Music Awards.

Great songwriting is not the only magic to “Light of Day,” there is some great playing on the record as well. Dittmeier’s guitar playing is a key roll to the success of this record. From the slide work on the lead single, “Light of Day,” to the picking on “Coming Home Soon,” Nick speaks just as loudly through his playing as he does through his lyrics. He is also backed by a powerful band made up of Alex Plamp (bass), Eric Baldwin (percussion), Gina Dougin and Clay Burchett (background vocals), Steve Sturgill (organ), Chad Acton (pedal steel) and Kyle James Hauser (banjo). If I had to describe the sound to you, I would say a little Black Crowes, a little Allman Brothers, a little Waylon and all Nick Dittmeier. This is a hard working guy who I believe is going to make a name for himself in the music world. Get on board now and check out “Light of Day.”